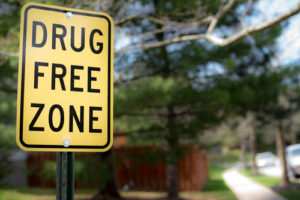 Drug-free zone laws are among the longest running sentencing policies in the US. These laws were enacted during the early 1980s as part of the “War on Drugs” during the height of the crack cocaine epidemic and were designed to increase penalties on those offenders who committed drug crimes in areas near children-heavy areas.

Much like mandatory minimum sentences for other offenses, the theoretical foundations are the same—to reduce crime—laws like these serve to provide harsh penalties which disproportionately affect racial minorities and lower-income areas, thus resulting in mass incarceration and disproportionately long sentences.

What is a drug-free zone?

Drug-free zones generally encompass schools—including colleges and universities—as well as school bus stops, public parks, YMCA’s, community centers, skating rinks and parks, treatment centers, public housing, daycare centers, and churches. Pursuant to Minnesota law, the boundaries of drug-free zones extend 300 feet—or one city block, whichever is greater—beyond the physical boundaries of the property. The expansiveness of these zones oftentimes makes it difficult for one to know if s/he is in a zone. For example, an individual could receive an enhanced punishment for standing 299 feet from a school, as opposed to 301 feet from one.

Offenders convicted of drug-related offenses in these areas are subject to enhanced penalties including extended prison sentences, high fines, and removal of parole options.

How drug-free zones are unfair

Because keeping drugs and associated violence away from children is a priority and the driving force behind drug-free zones, in some areas—such as low-income urban areas—these zones encompass a much larger area, thus becoming counterproductive. Resulting problems include the fact that some of these laws are so broad to as not involve children or other vulnerable populations even during hours where children would not be present in the first place. Consequently, defendants are subject to unreasonably harsh enhanced penalties for mere possession in areas designated as drug-free.

The bottom line is that drug-free zones fail to deter drug use among children while simultaneously punishing nonviolent offenders in disproportionately minority-heavy areas and are, generally ineffective thus resulting in mass incarceration and an ongoing high recidivism rate.