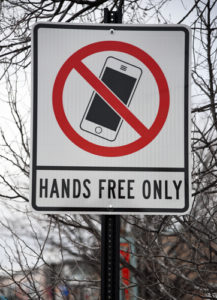 Effective August 1, 2019, Minnesota’s became the 17th state to enact its new hands-free cell phone law. While texting while driving was already illegal in the state, this new law prohibits even holding a cell phone while driving and gives law enforcement the freedom to stop anyone who is seen driving while holding a phone.

The impetus for the new law is, first and foremost, to make the roads safer. Other states that have enacted hands-free laws have enjoyed a 15-percent decrease in traffic-related fatalities due to cell phone distractions per National Highway Traffic Safety Administration (NHTSA) data.

Specifics of the law

Under the law, motorists may use their cell phones in limited capacity while driving: specifically, to make calls, text, get directions, or listen to music and podcasts only by voice commands or single-touch activation. They may not hold the phone while driving, nor can they use their phone for video calling, live streaming, gaming, Snapchat, using non-navigation apps, or looking at text or photos on the phone.

The only time a motorist can handle his/her phone is to obtain emergency assistance. Authorized emergency responders working in their official capacity may also hold their phones if performing official duties.

Drivers may not pick up and use their phones while at a stoplight because, technically, they are still operating the vehicle.

The law does not specifically ban voice-to-text; however, some lawmakers have voiced their concerns because there’s not way to prove whether a text was sent via voice or manually.

Under the law, it is not illegal to secure a phone in a headscarf, hijab, or wrap; however, to do so, the phone must be secure enough to neither obstruct the driver’s view nor require the driver to hold the phone.

The new law also views smart watches as electronic communications devices and may only be used as a conventional watch or in the same manner as a cell phone provided any function accessed is by voice activation or one-touch.

Finally, the new law exempts two-way, amateur, and citizens band (CB) radios as they are not classified as electronic messages. Nevertheless, users are still required to use them safely and prudently.

A first ticket for violating the new hands-free law is $50 plus court fees. Second and subsequent citations increase the fine by $225, for a total of $275 plus court fees.

Tips for complying with the law

Granted, the best way to comply with this law is to turn off your phone and place it out of sight while driving or turn on its do-not-disturb mode. If you need to have your phone available, then a properly utilized phone mount is a good idea.